The level of development of a country implies how socially, economically and culturally and technologically advanced is that country. The model of classification of countries is not the same all over the world.

It is an imaginative line that classified the planet into the poor south and rich north. However, the world has seen a dynamic change in the last 20 years and this line is not of much significance and is too simplistic and vague.

The classification of a country’s level of development is done in the following way: 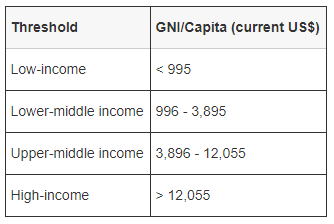 How do countries develop? There need to be some set indicators that signify the development such as the economy and social measures.

Some other measures of development

Although HDI is the most widely accepted and best measure to ascertain the economic and social factors, there are some other factors too which can be used for measuring development.

The Demographic Transition Model and Development

This model displays the population change over a period. There are five stages in this model and these are connected to the levels of the development.

Limitations of different measures of development

Relying on only one measure of development can produce vagueness, which is why it is usually better to use more than one measure. For example – Zimbabwe is considered a low-income country but its 84 per cent of the population is literate.

Another good example is China. It has a very low birth rate, still, it is not listed in the high-income countries by world bank. China’s policy of one child per family has significantly reduced their birth rates.

However, this policy has been changed now and couples are allowed to have two children. Demography experts have been showing concerns for many years over the strict birth control methods of China. They have been pointing out that these kinds of control can lead to the demographic crisis which can create gender imbalance and bring the population to a stage where most of the population is growing old. The low fertility rates and longer life expectancy of  China’s population, the UN estimates that 37% of their population will be over the age of 60 by 2050 putting them in the category of the ageing population. There is steep declie in the working age population of the country.

Advantages and Disadvantages of measures of development:

There are several factors that determine the level of development.

The factors that influence development are generally connected and countries call fall in the cycle of poverty.  For example – A country already burdened under the dept cannot put money in providing good infrastructure, educational and health facilities. Thus, people cannot afford hood hospitals and also have less awareness about the need for good sanitation and water. This leads to poor health of population creating a lot of diseases which further put pressure on the economy of the country. A less healthy population cannot contribute to the wellness of the economy and the cycle of poverty continues.

Consequences of inequalities in development

Uneven growth can create huge economic differences in a country. Also, countries with higher income can use their money to influence the decisions of other low-income countries.

The lack of efficient health services, safe and clean water and poor housing problems are common in lower income countries. The shortage of infrastructural facilities, factories and technical know-how, force these countries to sell their raw materials at way cheaper price. They do not manufacture on their own and rely heavily on imports. Further, corruption in governance creates a disparity in the wealth of people. These countries also see the migration of people to other developed countries on a large scale where they try to find a better standard of living for themselves.

A good supply of clean water, the presence of excellent health facilities and technologically advanced countries form the group of high-income countries. They import raw material for less price and produce better and more expensive products through their processing units. They have a good trade balance because their imports cost less than their exports. These countries generally have stable governments and the profit is used for the benefit of the people which leads to fewer disparities in health and wealth.