We all live in clumps of houses. You may call it a village, a city or a town; all are patterns of human settlements. The study of human settlements is essential to human geography because the form of settlement in any particular region reflects a human relationship with the environment. A human settlement is defined as a region populated more or less permanently. The houses may be planned or redesigned, buildings may be remodelled, functions may change, but settlement continues in space and time. There may be some settlements which are unstable and are occupied for short periods, even a season.

It is broadly accepted that settlements can be distinguished in terms of urban and rural, but there is no agreement on what exactly represents a village or a town. Although population size is an essential criterion, it is not universally accepted since several villages in the densely populated nation of China and India have a population exceeding that of some towns of Western Europe and the United States.

At one time, people residing in villages sought agriculture or other primary activities, but today, in developed countries, large segments of urban populations prefer to reside in villages even though they work in the town.

The basic distinction between villages and towns is that in towns the main profession of the people is associated to secondary and tertiary sectors, while in the villages, people are mostly involved in primary occupations such as agriculture, fishing, mining, lumbering, animal husbandry, etc.

Difference between urban and rural based on roles is more significant even though there is no regularity in the hierarchy of the functions provided by rural and urban settlements. Petrol pumps are regarded as a lower order function in the United States while it is an urban role in India.

PATTERNS AND TYPES OF SETTLEMENTS

Settlements may also be categorised by their shape and patterns types. The main types classified by shape are

Rural settlements are most intimately and directly associated with the land. They are controlled by primary activities such as agriculture, animal husbandry, fishing etc. The establishment’s size is relatively small. Some factors influencing the location of rural settlements are:

Usually, rural settlements are settled near water bodies such as rivers, springs, and lakes where water can be readily obtained. Sometimes the requirement of water drives people to settle in otherwise disadvantaged places such as islands encompassed by swamps or low lying river banks. Most water-based ‘wet point’ settlements have many benefits such as water for cooking, washing and drinking. Rivers and lakes can be used to water farmland. Water bodies also have aquatic living beings like fish which can be grabbed for diet, and traversable rivers and lakes can be used for shipping. 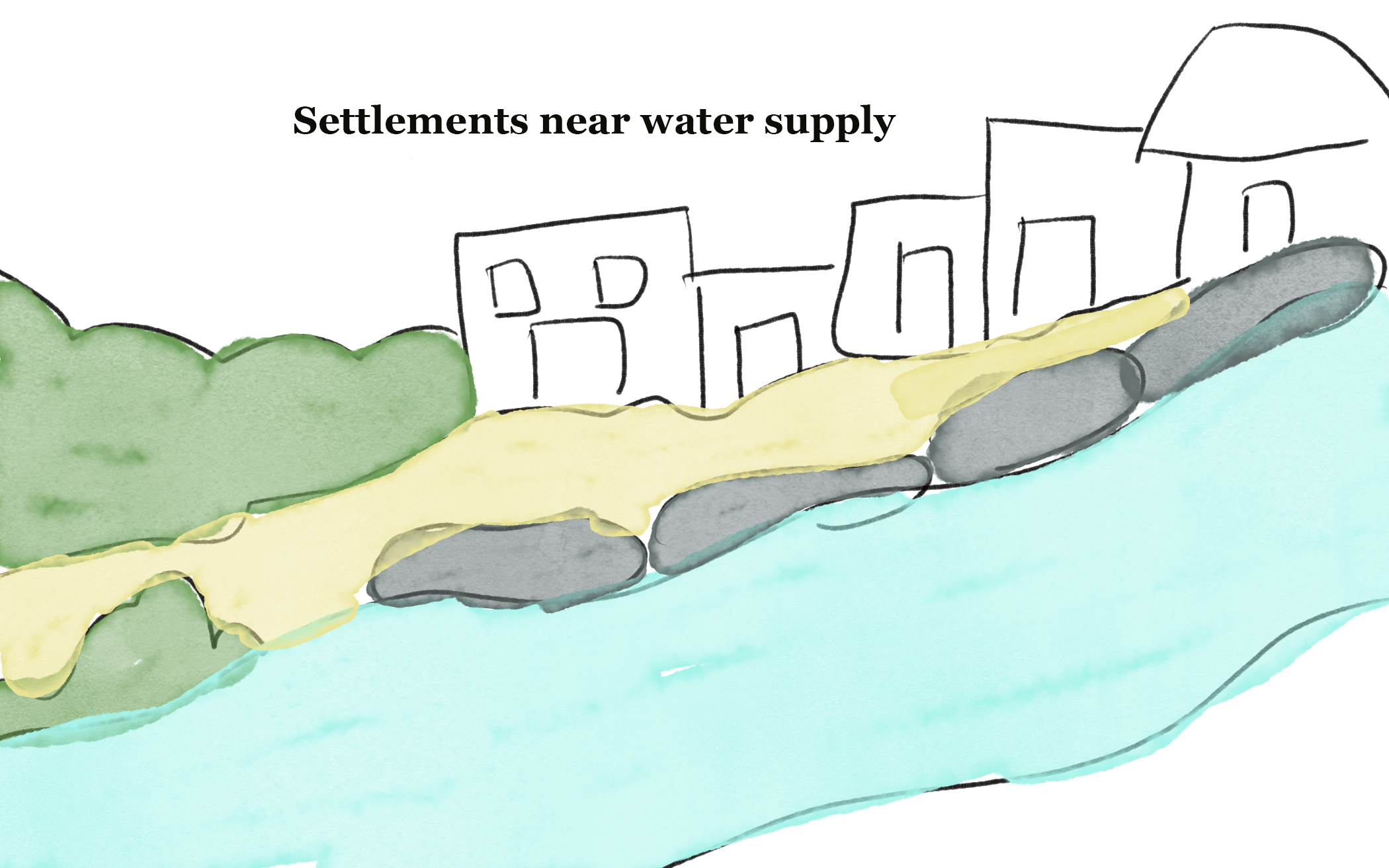 Upland which is not inclined to flooding was adopted to prevent damage to houses and loss of life. Thus, in low lying river basins, people preferred to settle on terraces and levees which are “drypoints”. In tropical countries, people mount their houses on stilts near marshy lands to defend themselves from flood, insects and animal pests.

The availability of building supplies- wood and stone found near settlements is another benefit. Early villages were constructed in forest clearings where wood was abundant.

During the times of political uncertainty, war, the hostility of neighbouring groups, villages were established on protective hills and islands. In Nigeria, upstanding inselbergs developed as good defensive sites. In India, most of the fortifications are found on higher grounds or hills.

Sites that are not instinctively chosen by villagers themselves, planned settlements are established by governments by giving shelter, water and other infrastructural facilities on acquired lands. The plan of villagisation in Ethiopia and the canal communities in Indira Gandhi canal command area in India are some examples.

Patterns of rural settlements indicate the way the houses are placed in relation to each other. The position of the village, the neighbouring topography and terrain impact the size and shape of a village. Rural settlements may be classified based on some criteria: