The Earth and its atmosphere are both controlled primarily by the Sun and together, they make up an interconnected global system. Different climates in different areas are the result of atmospheric movements (see the tricellular model below) within this global system. The reason behind these atmospheric movements is the difference in temperature between equatorial regions and polar regions, which is caused by the distance from the sun and the amount of atmosphere travelled through.

In general, it is the energy that flows in the atmosphere that causes the variations in our weather and climate.

The tricellular model is made up of three different air masses, these control atmospheric movements and the redistribution of heat energy. The three air masses, starting from the equator, are the Hadley cell, Ferrel cell, and the Polar cell.

The tricellular model also contains the ITCZ (Intertropical convergence zone), which is the meeting place of the trade winds from both the northern hemisphere and the southern hemisphere. The ITCZ is a low-pressure area where the trade winds, which have picked up latent heat as they crossed oceans, are now forced to rise by convection currents. These rising convection currents are then cooled adiabatically to form massive cumulonimbus clouds. 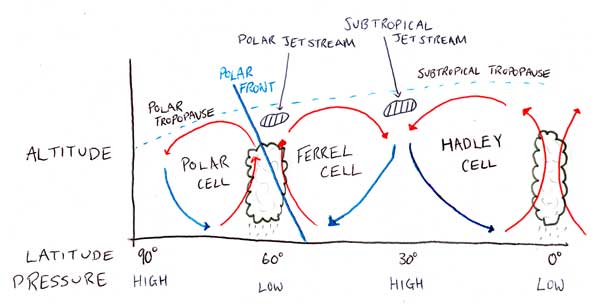 As seen in the diagram this rising air at the ITCZ leads to a circular movement caused by the cooling of the air called the Coriolis effect. This leads to the formation of the first air mass, called the Hadley cell, named after its discoverer.

Between the different atmospheric cells high up in the tropopause at a height of about 5 miles are the jet streams: the polar jet stream (40-60°N+S) and the subtropical jet stream (25-30°N+S). These jet streams move air at high speeds up to 130mph around the Earth horizontally and give rise to Rossby waves, which are types of inertial waves naturally occurring in rotating fluids. These jet streams were first discovered when Zeppelins were blown off course in WW1.

Rossby waves were discovered by Carl-Gustaf Rossby, a Swedish meteorologist, in the 1930s. They are waves or zigzags in the jet streams as they travel around the Earth. The number of waves varies throughout the year but usually, in the summer, it’s between four and six while in winter it’s around three.