Development of the river systems

The water that comes in the form of rain is partly absorbed by the ground, partly evaporated and some of its parts flows in the form of streams, brooks and tributaries of the river. The water flowing through the surface has the capacity to transform the earth surface through denudation.

It is the general lowering of the earth surface. It occurs due to the erosion of surface by wind, water and air. These agents take the material to the lower surface or in the sea.

However, for the erosion to take place, the weakening of the rocks is important without which the erosion is not possible. Rain, frost and wind are agents that slowly and gradually erode and weaken the rock surface leading them to further erosion and transportation. Snow and glaciers are confined to cold and temperate latitudes, winds are most efficient in the desert region and waves work on the coastlines. Only running water is an agent which has its effect in almost every region of the world, where ever it is present. Thus, running water plays a crucial role in the denudation of the surface.

The source is mostly an upland region where there is high precipitation and have steep slope through which water can run down and move forward. Therefore, uplands are said to be the catchment areas of the river.

A divide or watershed is formed at the crest of the mountain. From this divide, the rivers flow down the slope and start its journey to reach the ocean.

The initial and mainstream that develops due to the slope of the mountain, is called consequent stream.

The consequent stream moves on the surface and is joined by several other streams or tributaries either at right angles or obliquely depending on the resistance offered by rocks and their alignment.

Formation of river patterns on the basis of rocks:

Note: Rectangular and trellis drainage can be differentiated on the basis of the spaces in streams. Rectangular drainage is formed when streams are widely spaced while trellised drainage consists of narrowly spaced streams. 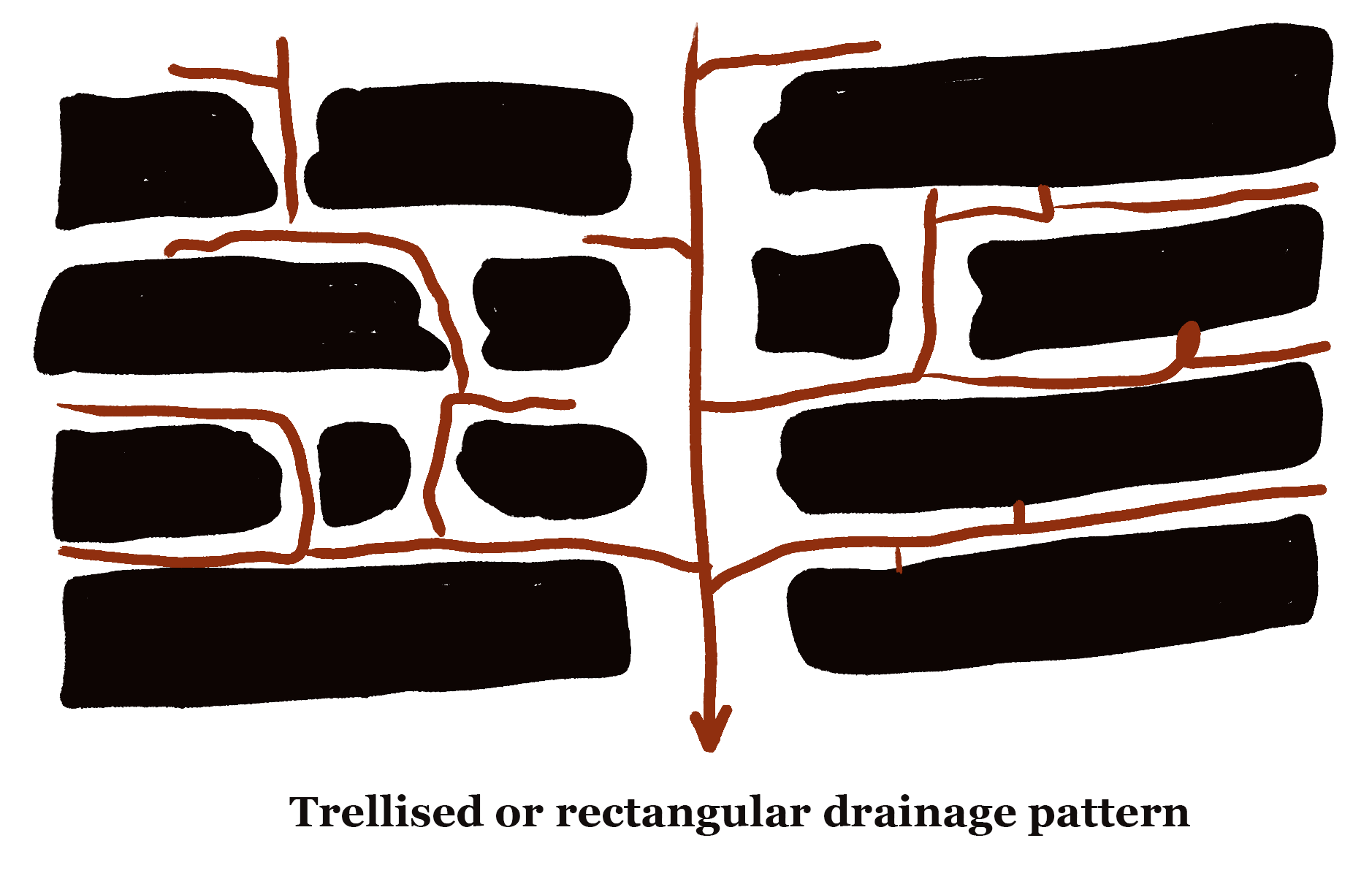 When the streams move in an outward direction from a high central point, it forms a radial pattern. Usually, this kind of pattern is seen in the flow of volcanoes as the lava emerge from one central point or crater. Laccoliths and domes also form radial patterns. It is formed when a stream of water flows in different directions starting from a centre point (usually a dome-like structure or a peak).

Amarkantak range, situated in India is one of the best examples of this kind of drainage pattern. 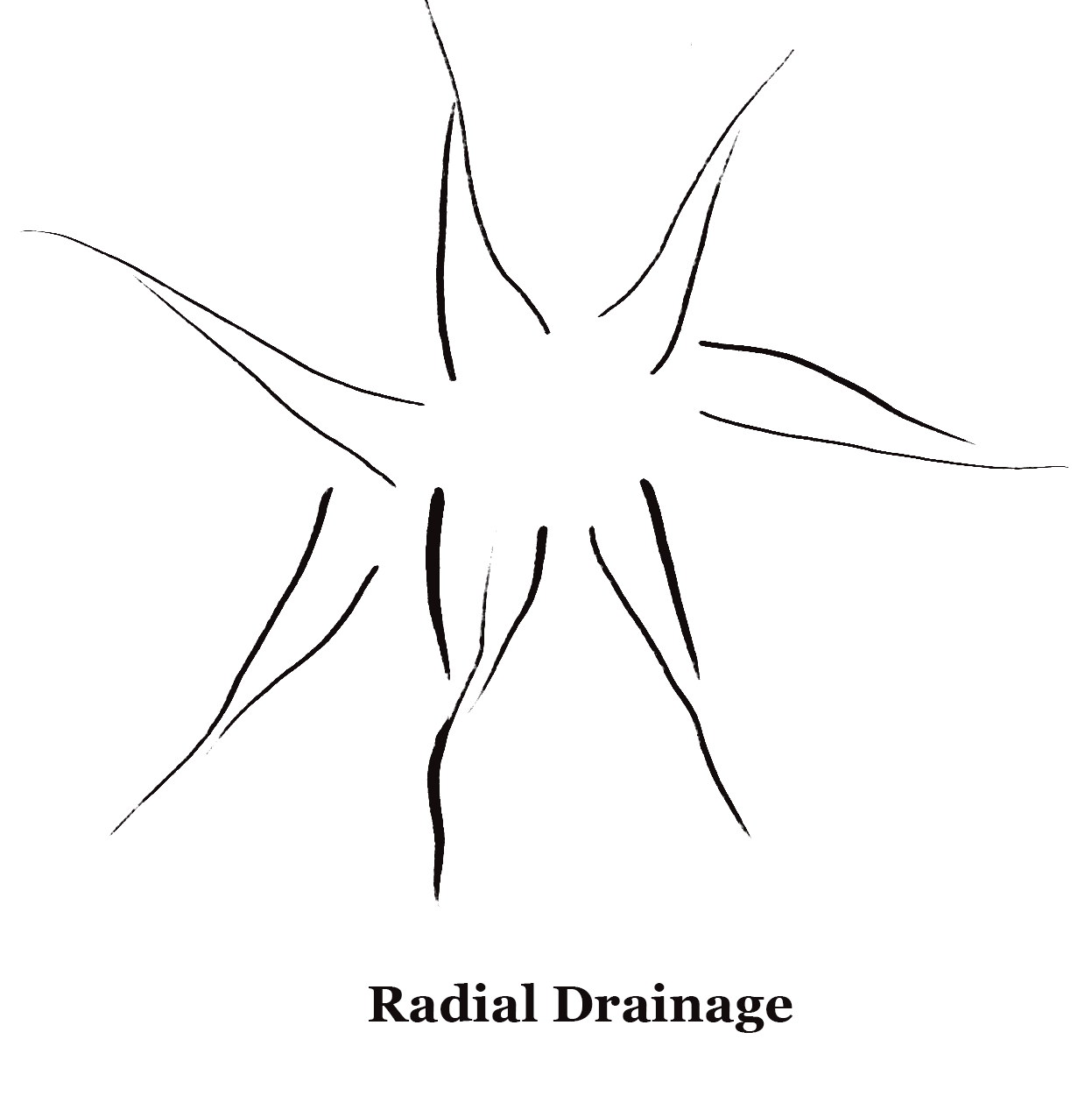 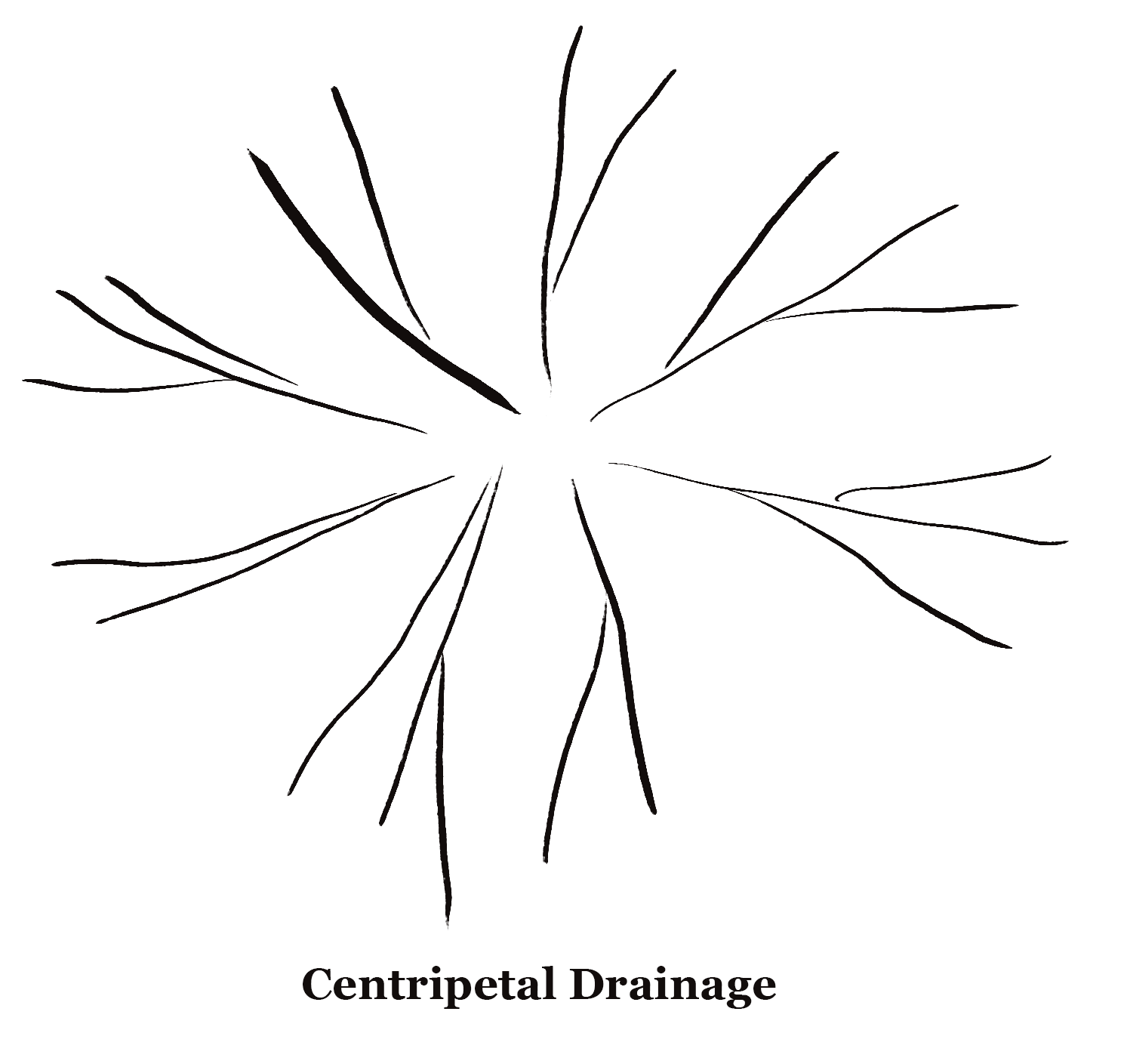 It occurs in drainage basins where there is no consistent pattern of rivers and lakes. The region in which this pattern occurs is usually geologically disrupted. For example – Canadian Shield. In this area, the topsoil has been scraped off during the ice age and only bare rocks are present. Further, the melting of glaciers leads to irregular elevation of land and collection of water in low areas forming a large number of lakes. This is also the reason, there are so many lakes found in Canada. The drainage basin is at a young stage and will take time to mature and stabilize.

When streams follow a rough concentric or circular path along a belt of weak rock and form a ring-like pattern, it is called an annular drainage pattern. It can be seen in the regions where streams flow through the maturely dissected basin or structural dome where the sedimentary strata vary in hardness. The nest example is the Red valley which encircles the structure of Black Hills of South Dakota. 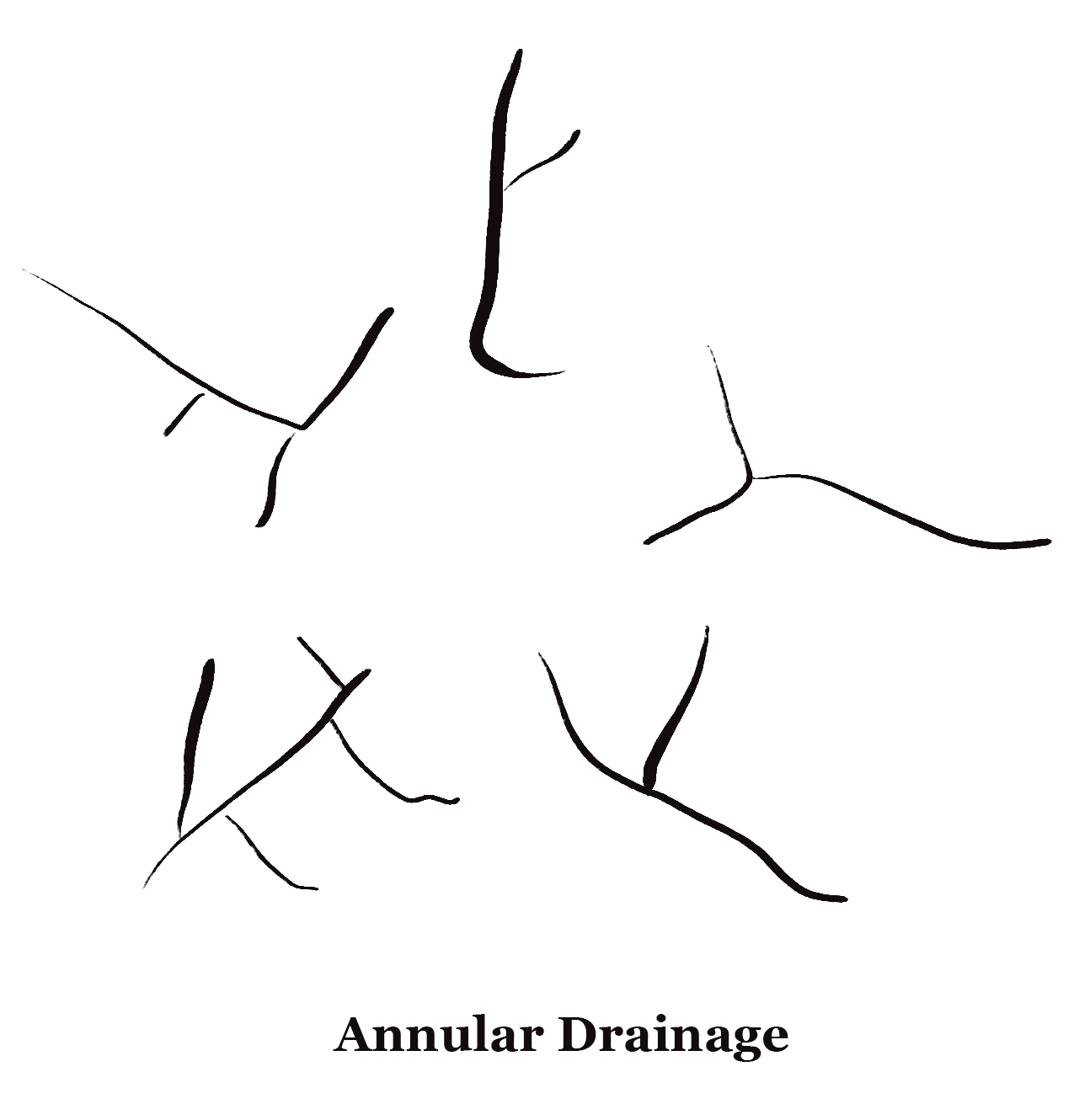 When streams meet the main river at acute angles due to the presence of bedrocks and faults present at this angle, it is called angular drainage. The angle so formed is either more than 90 degrees or less than 90 degrees.

When a drainage pattern is formed which does not match the topography and geology of the region, it is called a discordant drainage pattern. It is further categorised as –