A mountain is a type of land that has risen above the surrounding territory in a limited area. Mountains are formed of rocks and soil. The height of the mountains ranges from 600 m to more than 8000 m. If the height of the raised land is less than 600 m, then these are called hills.

● They have a significant height above the sea level or land surrounding it.
● Steeper and higher than hills.
● Peak – It is the pointed top of the mountain
● Climate varies as we move above the base of the mountain. Usually, mountains have a cold and wet climate which is accompanied by a thin layer of oxygen.
● Less flora and fauna.
● Adaptation in plant and animals can be seen due to the presence of extreme climate.

Interesting Fact – Some of the largest and highest mountains are found at the bottom of the sea. One such example is Hawaiian islands which are situated on the top of the mountain which is mostly submerged in the ocean.

The Atlantic Ocean have the largest range of mountains.

One- fifth of the land is covered with the mountains, and 75 percent of the countries have mountains.

The mountain regions have a scanty population. This is so, because steep slopes, lack of agricultural land, lack of transport facilities and extremely cold climate makes them unsuitable for human habitation.

Based on their origin and variety of forms, mountains can be classified into four types – fold mountains, block mountains, volcanic mountains and residual mountains.

Huge amounts of sediments are deposited on the sea bed, forming horizontal layers. When these layers of sediments are compressed from both sides, they are squeezed and folded. Gradually they get uplifted and form fold mountains. 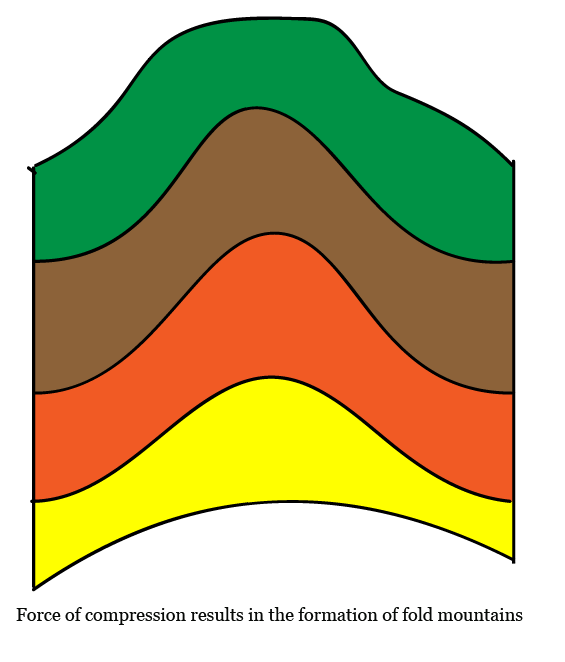 The Himalayas, the Alps, the Andes, and the Rockies are all young fold mountains formed in the recent geological ages. They are very high, with steep slopes and sharp, pointed peaks. The old fold mountains like the Urals, the Appalachians, and the Aravallis are low in elevation and have moderate slopes and rounded peaks. The force of erosion have acted upon them for centuries and have considerably worn them down.

Sometimes, due to the forces of compression or tension, cracks or faults occur in the Earth’s crust, and the horizontal layers of rocks break down into several blocks. These blocks either get uplifted or subside along the fault. The uplifted blocks are called block mountains or horsts, and the subsided blocks are called rift valleys or grabens. The Rhine River Valley is an example of rift valley enclosed by tw block mountains – The Vosges and the Black Forest.

When a volcano erupts, hot molten lava, together with ash, cinder, smoke, etc., comes out from the opening. When this lava comes into contact with the Earth’s surface, it cools down and solidifies, forming a cone-shaped mountain. Mt Fujiyama in Japan, Mt Kilimanjaro in Tanzania and Mt Vesuvius in Italy are examples of volcanic mountains.

The forces of erosion, like rivers, glaciers, and wind have been acting upon old fold or block mountains for millions of years. The soft rocks have been eroded more than the hard rocks, which remain standing as highlands. Such mountains are called residual or erosional mountains. The Aravalli range in India and the Sierra Nevada in Spain are good examples.

Mountains are a very important natural resource. They are useful to us in various ways.

● Mountains are the storehouse of water. Many perennial rivers originate in the glaciers.
● These rivers provide us with water for irrigation and our daily requirements.
● Dams are built across them generate hydroelectricity.
● The river valleys and the gentle slopes of the mountains are used for cultivation of crops and fruits.
● Mountains provide minerals for industries and stones for construction.